While walking through Akihabara we stumbled on the “Square Enix Cafe”, a restaurant that I had never heard of before; but being a Final Fantasy fan I was eager to see what it was like. Square Enix Cafe is very close to the train station, right next to Yodobashi camera, so it’s hard to miss.

When we entered the cafe it was around 9:30 am, still a tad early for lunch, but the girl at the entrance said there was a reservation slot available for 11. So we made a reservation and explored the labyrinth that is Yodobashi for an hour or so before returning.

Confusingly, despite having a reservation we had to wait in a line down the side of the building where an employee eventually came, asked our name, and handed out three passes. In a few minutes when we entered the restaurant they took those back, a process that seemed strange. Thinking back now, perhaps it was to save time at the entry point.

The Square Enix Cafe is pretty small; when you enter there is a bar/food preparation area and a set of steps immediately to your left. Up the steps is the seating area, containing roughly 10-15 tables tightly spaced, and large TVs hanging around the room. One of the side walls was mirrored, presumably to make the area feel larger than it actually was. Next to the seating area was a small gift shop, also cramped but packed with goodies such as Square Enix-themed hand fans and figures.

It just so happens we were there on the day after the release of Square Enix’s new RPG game for the Nintendo Switch, Octopath Traveller, and due to the aggressive advertisements on the trains in Japan I had actually already seen some of the gameplay. Square Enix has made an interesting design decision in this game––it is rendered with retro-style blocky sprites, even though the game is for a top-of-the-line modern gaming machine. When I first saw Octopath Traveller in action, I was impressed how they used various effects to ornament the sprites and achieve a visual experience I’d never seen before. However, when I saw the game later on a big TV in Yodobashi the graininess of the graphics seemed overkill, and I found myself wishing there was some setting to improve the resolution. Nonetheless, just seeing this game made me want to go out and buy a Nintendo Switch.

On account of the game release, the cafe’s TVs also played videos with gameplay details and interviews about the game’s making. Ironically, due to noise and the low volume of the TVs I couldn’t hear any of the Japanese audio, and had no choice but to read the English subtitles. There was also a display case near the bathroom holding something that looked like a musical score from the game. Below that was a list of all the characters on a chart, and each of us was given (very!) tiny dot stickers so we could vote for which character would “win”. I never found out if my character won or not.

The other way the game was integrated into the experience was on the menu, which was displayed on a tablet at each table. We were able to order from ours without actually calling someone over. Each menu on the item was themed to fit the game, for example a plate with bread and cheese came with a long, narrow knife that was in the shape of a sword. The food quality was so-so, and some of it seemed overpriced (like the bread and cheese plate, which if I remember correctly was around 1000 yen). The service wasn’t particularly great, since we had asked for three waters and it took a really long time for them to come. Another minor annoyance was we only had a limited amount of time before the next set of reservations came up and we would be kicked out (I think it was an hour and a half). While we didn’t have the need to stay that long, it was just the idea of the time pressure that bothered me.

I was glad to be able to visit the Square Enix Cafe, though overall it was a mediocre experience in terms of service, food, the facility itself, and their attempt to integrate the newly released Octopath Traveller game. Having said that, for diehard fans of Square Enix I think this is a must-see destination in Japan. One nice bonus was that they gave us a small poster when we left, which I assume (hope) is only available to those who visit the cafe.

I put a few pictures from my visit below so you can get a feel for what it was like. 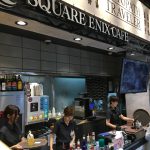 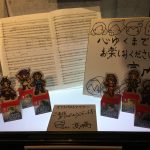 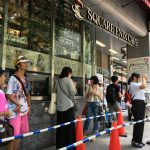 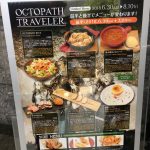 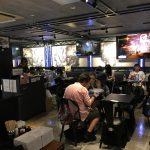