This article is part of the series about my July 2018 trip to Japan. Please see the table of contents page for other articles in this series as they are posted.

I’ve been interested in robots since my college years (I took a class where we built and programmed robots), and I’m very lucky that my son has also grown an interest in them, though he is still too young to do much actual programming of them. Japan is known as a country that is pretty active in robot research, so we set an informal goal of this trip to find interesting robots to observe, maybe even purchase.

Our first robot encounter was in the Sony store in Sapporo, which had two of the latest Aibo robot dogs on display. I’ve always been a fan of the original Aibo, which was discontinued for several years until a new model was released, to my great joy, earlier this year. The latest Aibo, like the earlier revisions, is made with a modern, futuristic design, and the eyes now even have lights in them for more expression. Unfortunately, the latest Aibo is only available to those who win an online lottery, and on the day I was considering entering it I discovered the lottery had ended only hours ago. I confirmed with the employee at the Sony store that there were no units in stock there, which is ironic since they have them on display. But it makes sense since they are shown off in the front of the store (just live puppies at a pet store) in order to draw in customers who will examine, and hopefully purchase other items.

The employee there didn’t know very much about the new Aibo’s features, but she let my son play with it for a few minutes; we even got to take a video (see it here), which I posted to my Instagram account. After seeing Aibo live, despite the stylish design I was a little disappointed that it shared, in my opinion, the biggest flaw of the other Aibo models: unnaturally slow movement. I understand there are technical limitations that need to be overcome, but I’m still debating whether it is worth it for the price, currently $1700 plus a monthly subscription. Assuming it is programmable, if nothing else it would be a great testbed for artificial intelligence. For the time being, however, my son will have to be content with the $100 WowWee robot dog Chip, whose design is clearly influenced by Aibo. (You can see Aibo’s website here)

We were fortunate to come across Pepper, a humanoid robot designed to communicate with humans, in several places in Japan. Three of them were in the Softbank store in Omotesando (表参道), one of the pricer shopping areas in Harajuku (原宿). The first time we saw Pepper in person was in Hawaii, but this is the first time we saw three at once. Pepper is designed more for talking than for complex movements, but its slick design and eerie way its eyes track you as you move is pretty impressive. The most disturbing moment for me was when I was leaning against a counter because my legs were feeling exhausted from days of walking, and Pepper said to me (in Japanese) something like, “Oh, it seems that you are feeling tired. Make sure to take a rest once in a while.”

While far from androids you see in Hollywood movies, Pepper is pretty impressive so if you’re a robotics or technology fan I highly recommending seeking him out. Another place you can find him is in on the first floor of Yodobashi camera, the massive electronics store in Akihabara (see this article I wrote about this store a few years ago).

In a place like Akihabara, a portion of which is called the denkigai (電気街, “electric district”), you might think there are other stores that show, and even sell robots––and you would be right. Several years ago I had heard of the store Tsukumo Robotto Oukoku (“Tsukumo Robot Kingdom”), claimed to be one of the few robotics specialist stores, and on this trip I finally got to visit it. While we were at it, we found another robot store in the area called “Vstone Robot Center”.

These stores share in common several things: they were both relatively small spaces on an upper floor of a building, lined with shelves packed with robot parts, robot kits, and a few robots in display cases. There were less-advanced, inexpensive robots for less than $100, as well as advanced robots loaded with sensors and servos for several thousands of dollars.

The main difference was that the Vstone Robot Center had a slightly larger area and was better organized, with a better selection. It didn’t hurt that there was a Pepper to greet us at the entrance.

While it was interesting to see the great variety of robot parts, kits, and assembled units, there were many non-Japanese products, and I think most, if not all, of the Japanese-made ones can be ordered online––though of course you have to deal with shipping costs. I’m guessing these shops make more money on the cheaper parts than the larger units. We ended up buying a programmable robot called foro (フォロ, follow) for under $100, and also a tiny, cheap figure that represented a more advanced robot called Robi (ロビ) But when we left the store and checked the bag, we found out that the figure (which we paid around $10-$20 for) was actually included inside the first part of a kit to build the Robi robot itself, which also contained a few parts of the larger robot’s head. The bad news is that there is 70––no that “0” is not a typo––parts to the kit (essentially magazine issues with parts in an attached box), and the total price to build the entire robot is supposedly around $1,500. While I don’t think we’ll actually buy all the remaining 69 boxes (the shipping alone would probably cost a few hundred dollars), I think it’s a pretty smart marketing idea to break an expensive robot into bite-sized pieces. Even if many people only buy the first few kits, the maker would make more money than not selling any robots at all.

Ironically, when we returned to Oregon and went to a local toy store, we found a new robot on the shelves that looked almost identical to the “foro” robot that we had just purchased in Japan, except the name was different. This further drove home the lesson of how globalization is making products available all over the world, but as a result there is less value in searching for unique goods in a foreign country. By the way, I also checked the mother-of-all-electronics-stores Yodobashi Camera in Akiba to see if they had robots. They oddly had a very limited selection, with one of the only available being Cozmo, made by American company Anki (another irony due to globalization).

Nevertheless, for any diehard robot fan these two stores are a must see.

Now for a true robot lover, no trip to Japan would be complete without experiencing a live demonstration of Honda’s Asimo, the famous two-legged robot known for its incredible balance and dexterity. We were fortunate enough to be able to do that at the Miraikan, a wonderful science museum in Odaiba that is more formally known in English as “The National Museum of Emerging Science & Innovation”. (I’ll talk about this place in more detail in the next article of this series.)

During the ~15 minute presentation, Asimo performed a bunch of tricks including a sideways crab walk, gesturing dynamically with its hands, hopping on one leg while inching forward, kicking a soccer ball placed at its feet, and even doing sign language in sync with a song. The performance had an explanatory recording in both English and Japanese, and in between performances a scientist-looking guy (I forget his actual title) talked about the robot in Japanese as well as a little English, though the latter was pretty rough.

While Asimo is a nice-looking android that performs some cool tricks, to be honest I was personally a little underwhelmed. It wasn’t just the slightly awkward way it moved, it was more so (in an ironic parallel to Aibo) how slow all of its movements were––especially considering Honda must have spent millions of dollars on Asimov’s R&D. It seems that this car maker has been in the two-legged robot field since the 1980s, and there were several versions of its predecessors before the creation of Asimo began in 1999. I will acknowledge that the visual design, walking speed, battery life, and other specifications have clearly improved in successive versions of Asimo, the final one being made 2011. Perhaps the reason that Asimo doesn’t appear cutting edge anymore in 2018 is that it is, at least in part, based on technology that is decades old. It may take a complete redesign to achieve something truly groundbreaking, and I have heard several other major companies are competing in this field.

Given this, you may not be surprised to hear the retirement of Asimo’s development was recently announced. But I wouldn’t worry––I’d imagine they will continue showing the demonstration of this slow, yet agile robot for some time; after all, they have a whole line of figures of varying sizes in the souvenir shop near the museum.

Everything I learned about robots on this trip to Japan confirmed my belief that robot technology is not ready to be deeply integrated into society, regardless of how much we want it to be. A few exceptions would be factories, where advanced robotics has been employed for decades, and medical fields, where there are gradually more procedures that robots can either do on their own or with minimal human assistance. I guess you can include drones, which have enjoyed a recent boom in the last few years, although I think their most common use involves human control.

However, while disappointing in a way, I see this is a great opportunity for humanity to keep the pressure on robotics development and, just maybe, release some impressive robots in the next few years. By the way, if you are interested in doing some robotic experimentation yourself I recommend the “Sparki” Arduino-based robot that currently costs around $150 (or less, if you can catch it on sale in Barnes & Noble) and comes already assembled with an arsenal of sensors and advanced programming via visual tools as well as a simplified form of C. There is also Hubert, a new robot by the same company (ArcBotics), a biped boasting a large number of servers. According to the Kickstarter page, they should have started shipping in May, although it’s a bit more costly at $599.

(Note: If you happen to live near Portland, Oregon, the science museum OMSI is currently running a great exhibition about robots called “Robot Revolution”, though it is ending soon, on September 3). 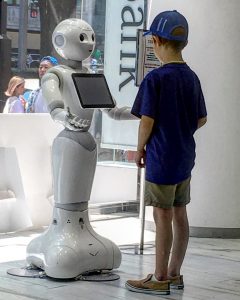 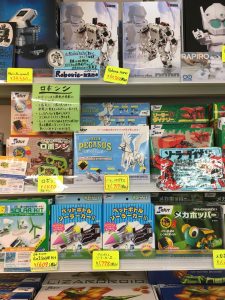 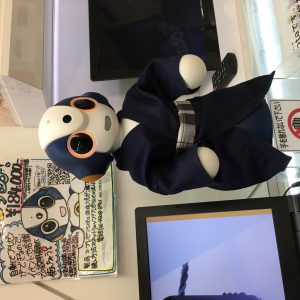 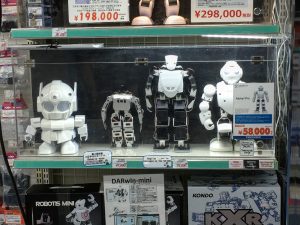 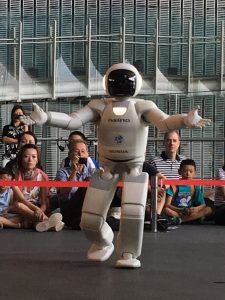 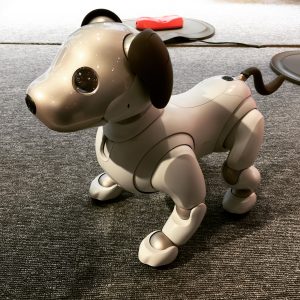